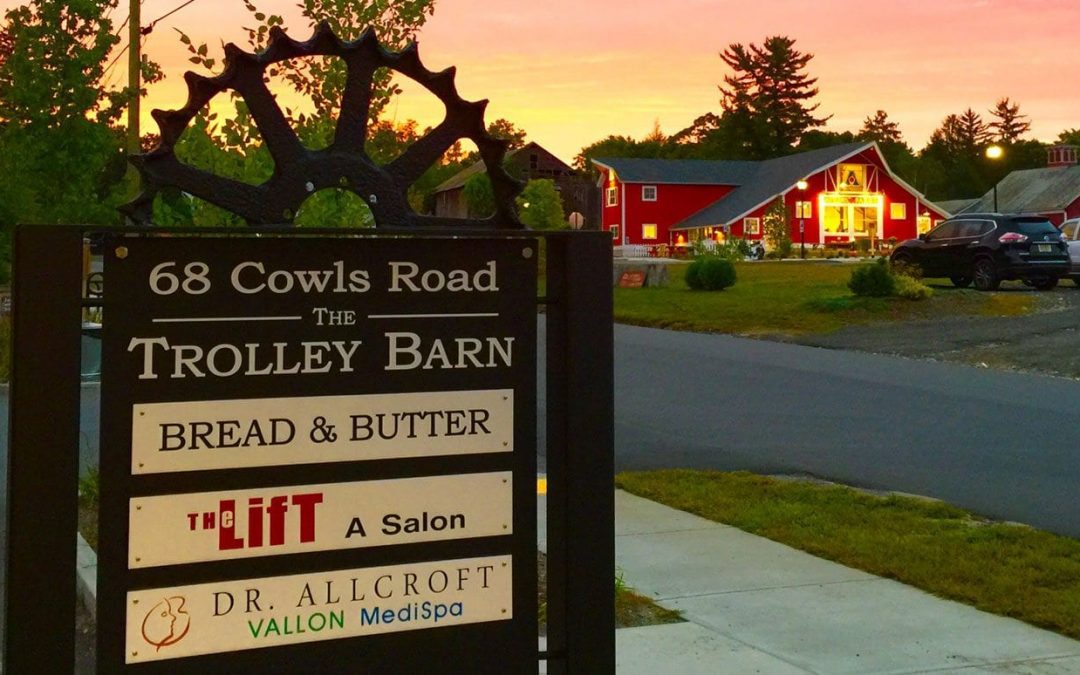 By SCOTT MERZBACH
Staff Writer
As the first business to open in the Trolley Barn project in North Amherst, Jennifer LaChapelle, co-owner of The Lift salon, says she is excited about the prospects for her new location in the Mill District.

“I always felt that North Amherst would be a perfect place to have a salon,” LaChapelle said.

The Lift, which LaChapelle runs with co-owner Kim Rodrigo, is joining established businesses such as Cowls Building Supply and The Harp Irish Pub and others about to come, including Bread & Butter restaurant and an Atkins Farms Country Market North.

LaChapelle notes that her business was one of the first tenants in 2002 at the Eastworks building in Easthampton, and she is confident that North Amherst will see a similar influx of residential and commercial tenants.

Her 28 employees, specializing exclusively in hair and even being trained in Paris for the French highlighting technique known as balayage, will shuttle between the Amherst and Easthampton locations.

“It’s exciting to be in on the first floor of a new building and help see everything else grow,” LaChapelle said.

The Trolley Barn is one of the projects in Amherst and along the Route 9 corridor in Hadley demonstrating that the economy is making a strong comeback, as many entrepreneurs and investors jump at the opportunity to open their businesses.

Evidence of this growth, he said, are the numerous developments completed or under construction, and others in the planning stages.

Arguably the two most visible projects over the past year in the towns have been the Kendrick Place building at the north end of downtown Amherst, where 24 apartments and a ground floor that will feature an Easthampton Savings Bank branch and other unidentified tenants remains under construction, and the completed mini-mall on Route 9 in front of Home Depot, where national chains like Starbucks and Aspen Dental are joined by Hot Table, a regional restaurant.

More growth is anticipated in Hadley, where the Planning Board approved a proposal to rebuild the Pizza Hut site near Stop & Shop and construct a Texas Roadhouse near Lowe’s. The board was also presented plans for a new commercial development near Mill Valley Road, close to where the renovated former Gauthier Automotive is being converted into Brigade design studios.

“We’re seeing retail development along Route 9 in Hadley again, which had been put on the shelf for a number of years,” Courtemanche said.

Meanwhile, rumors about possible redevelopments are persistent, such as the site of the former Aqua Vita restaurant that stands idle.

Florence Savings Bank opened a new branch and closed its former site, and a Burger King restaurant closed, leading to speculation about development that might occur on the property in front of Mountain Farms Mall.

In front of Hampshire Mall, a Moe’s restaurant opened in 2014 while the neighboring Hunt’s Photo space is vacant after the store relocated.

With the bankruptcy and planned auction of Long Hollow Bison Farm home of the former Seven Sisters restaurant, Courtemanche said there is potential to reopen the business and add more development to the site.

In Amherst, Courtemanche points to the “bookend” projects at the town’s northern and southern ends, with the Trolley Barn at the northern gateway and an office building in South Amherst being built by Ronald Laverdiere in the Pomeroy Village center nearing completion.

Amherst Town Manager John Musante said he is pleased to see such significant investment in downtown and village centers. “I think there’s a growing sense of optimism and very positive momentum in Amherst,” Musante said.

The planned redevelopment of the Amherst Carriage Shops continued to shake up the business community throughout 2014, leading to the closing of some longtime businesses and the moves of others.

Though not part of the Carriage Shops, The Mercantile was a long-time tenant of the neighboring Summerlin Building, but owners took the chance to be in a more prominent location when another longtime business, Food for Thought Books, closed.

Other vacant space was quickly filled. Mango Mango eatery closed and transitioned into Mom’s Noodle. Scandihoovians ended its run as a fixture in both Northampton and Amherst and was replaced by Judie’s Art Bar and Thai Corner shut down and became El Rinconsito Cosatelico, Moti, which serves Mediterranean cuisine, consolidated into space with Lit nightclub, with Moti’s former space becoming The Taste Thai Cuisine. Exscape Smoke Shop replaced the closed D.P. Dough.

Two long-term vacancies finally found tenants, with The Works Bakery and Cafe sliding into space at the Tucker-Taft Building last used by a Papa Gino’s, and Wild Side Smoke Shop moving into the former Jeffery Amherst Bookshop.

Some of the businesses that closed haven’t yet found new tenants, including Wheatberry Cafe on Main Street and Amherst Tattoo on North Pleasant Street.

Scott Merzbach can be reached at smerzbach@gazettenet.com